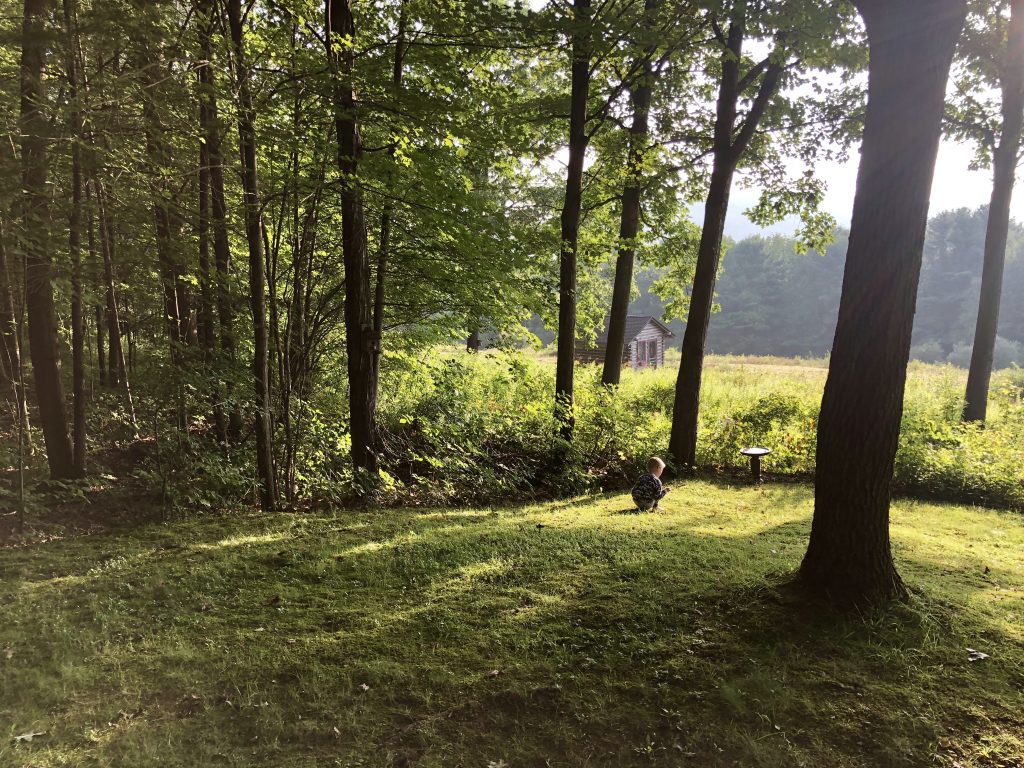 It’s been almost two weeks since I last posted, and time has flown.

We left town Friday, July 24th for another week at my family’s cabin in upstate NY and after a week of being off the grid, I almost forgot what being online felt like. Although I jumped right back into my online consignment addiction, Facebook scrolling, political article reading and book club reading… I did not get back on the blog circuit until now.

Not sure why, except that I needed a break.

And my plan, outlined in the last post, to get back on track with exercise, meditation and other healthy activities, is in Day 4 and going well.

Today was the boy’s first day back at PreK, and my first day back at work after vacation (a soft reentry, working from home in my workout clothes right now). The morning went perfectly. Up before the boys, coffee, meditation and 1/2 a FIIT workout in before they came running downstairs, super excited about starting at their new PreK.

It’s amazing how simple and yet how hard it can be to do what our bodies need us to do to be happy. I’ve been in such a slump lately, and I know it has to do with how little exercise I’m getting, zero meditation, too much pot smoking and late nights as a result.

So, knowing that, why has it been so difficult to interrupt this slump by doing the activities I KNOW will fix it?

But today, I’m feeling pink-cloud-ish after having hit the trifecta: good sleep (thanks to no smoking last night), exercise, and meditation. I guess we could add eating well, and accomplishing a few to-do items which always puts me in a better mood.

Of course I’ve learned not to expect this pink-cloud euphoria to last, but I am definitely enjoying it while it’s here.

Alcohol-related thoughts over the last week were few and far between. In fact, I can only think of twice where it was really on my mind – both times, on a date with C.

We celebrated our 8th anniversary at the end of August. While upstate, we took advantage of my folks proximity to escape for a night at a Fingerlakes B&B, and had a nice dinner lake-side. Arriving early for our already early reservation (joined only by the over 60 crowd ha!), we talked about sitting at the bar but I wasn’t feeling it so we walked to the pier to see the historic boathouses instead. Later after dinner was over, we didn’t feel like going back to the B&B yet, so we strolled around town and ended up at a bar, which I assured C was OK. I scanned the cocktail list while he ordered a local brew. As he went to drag the menu away from me (being helpful, I think?) I told him I was trying to select which of their fancy drinks to have a virgin version of… in the end, selecting a blueberry mint spritzer which was delicious.

Dates have been the toughest time to avoid drinking lately. Something about the specialness of the evening, wanting to add that element of “fun” or “treat” to the mix. And to be honest, maybe I also feel a bit awkward in that setting. C and I rarely get time alone together anymore, and I have mixed feelings about our relationship. The really tough stuff we’re dealing with is under the surface, and no one wants to ruin a night out with that, so we talk about superficial stuff – something I’m not great at in general, but especially with my husband of 8 years.

In any case, it’s probably better all around that I don’t drink anymore. Because when I did, the stuff below the surface would bubble up in the most un-date-like ways. Our favorite date-night restaurant is now off-limits after too many angry endings, two or three stiff cocktails in with both of us storming out of the restaurant to a silent drive home.

Much less drama this time around, and I focused on making room to really listen to HIM instead of trying to accomplish some agenda. While our conversations were light, and nothing was “accomplished” per se, we ended up happier and closer at the end of our time together and that IMO, is worth it. Sometimes, I think we just need to get more positive time together under our belt before anything can be worked on.

And speaking of filling buckets, I worked on filling my boys buckets to the brim this past week, in time for school to start. Lots of physical attention, wrestling, running/catching, swimming, hugging, snuggling, back scratches. Lots of focused emotional attention, really listening and being present for their stories and sad times, invented games and imaginary worlds. Lots of thinking ahead, what kinds of things they might need to be prepared for, finding cool school supplies and outfits that they picked out, talking about different scenarios, helping them prepare.

And almost every time I really meet their eyes, really SEEING them without any agenda in my mind, I think “this wouldn’t be possible if I was still drinking”.

It wasn’t until after I quit that I found myself able to do this with anyone, not just my sons.

It’s like I can finally see outside of myself, really SEE.