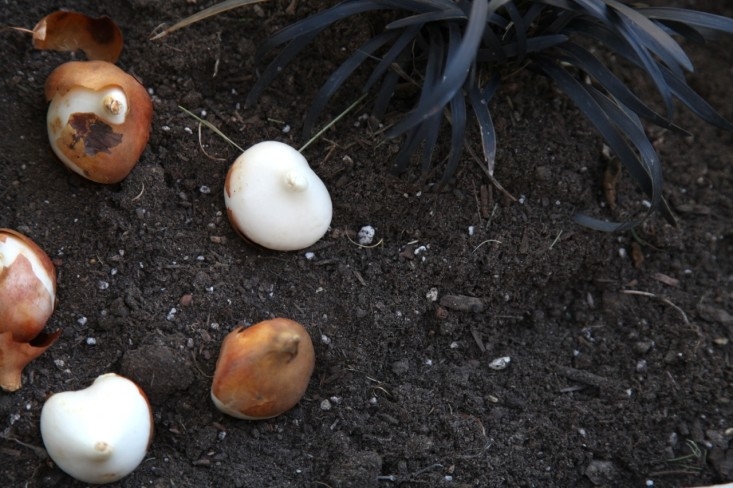 Should Day 50 feel significant? It went by with little fanfare. In fact, it’s been a bit of a mixed-bag… leaving me at loose ends tonight.

Another weekend day where C and I went our separate ways – him to mountain bike, and me – to take down the garden and go hiking with the boys. An outdoor day, which usually improves my mood but although my time with the boys was wonderful, I find the funk still sticking tonight. And I was short on patience and quick to snap at the kids and C all day. I’ve taken an early shower and hope to go to bed on the early side, as I know how much sleep (or the lack of) plays a part.

While planting bulbs this afternoon, I was reminded of the quote I read on the church billboard weeks ago… “You must till the soil before you can plant”. And I was doing just that, tearing down this summer’s veggie garden, trimming down the front gardens, pulling out unsuccessful perennials, and then turning the soil to plant bulbs, 3, 5, 6″ down. The process was messy, dirty, ugly. And the yard looks much the same after hours of sweaty labor. The effort was in the hope of beauty next spring. The reward is long-term, not short-term. I was realizing how much of my adult life has been spent seeking short-term pleasure, and how little on the striving and hoping required for long-term reward. Was this partially the result of drinking so much? May my patience and self-control improve with time and self-awareness. (Did I really take until 40 to start growing up?)

The other, somewhat sad, realization I had was that I would not be able to connect with my husband as I had wanted to, needed to tonight. Why? Primarily because he had been drinking heavily. At dinner, his eyes were bloodshot and I almost thought he’d been crying, but then realized it was just the amount of alcohol he’d had all afternoon (heavy G&T’s since about 2pm). I still held out hope that we’d be able to talk through a work situation, so he could provide some advice from a manager’s perspective. Tomorrow is my big chat with HR about the potential position, and although I know I don’t want to take it, I don’t want to turn them off to a future opportunity. I wanted to run some verbiage by C to make sure I was handling the situation professionally and with grace. In other moments like this in the past, he has been a good sounding board. But he was far from able to do that by the time the boys were in bed. He remembered that I’d brought it up earlier (I usually try to warn him when I want to ask something complex/important because he is a slow processor) and asked if I wanted to talk about it, but his eyes were half shut and I knew he wasn’t in the best place for a conversation about professional delicacy. I tried anyway, and threw out the phrasing I knew was wrong and rough and awkward, the phrasing I’d hoped he could help me massage. And he just said “Go with that!” But of course, I can’t.

This is tough, not just for tonight’s lack of connection, but for the constant lack of connection I’m now feeling more deeply than before. So so many things I would love to have conversations about, ask him about, tell him about – life, planning ahead, growing old together, how to handle our kids now and as they get savvier, more mature, dreams, goals, and tough stuff like what it’s been like for him to lose his parents, what it might be like to lose mine, how would we handle one parent needing to live with us, real tough life shit. But we can barely talk about the immediate logistical stuff like buying dog food.

I know it’s not just alcohol’s fault, but tonight, I blame alcohol for 90%.

Saving this article for later, definitely need to do a better job of this.